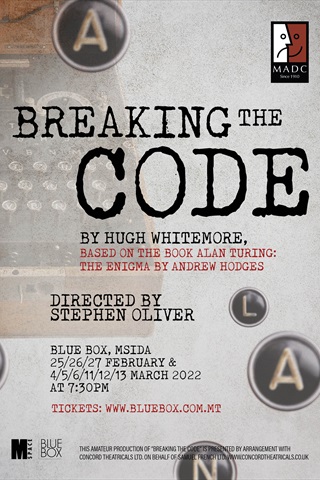 By Hugh Whitemore, based on the book ‘Alan Turing: The Enigma’ by Andrew Hodges

“A fine tribute to the genius of Alan Turing” - The Times

Breaking the Code took London and Broadway by storm in this exceptional biographical drama about a man who broke too many codes: the eccentric genius Alan Turing who played a major role in winning World War II. He broke the complex German code called Enigma, enabling allied forces to foresee German manoeuvres. Since his work was classified top secret for years after the war, no one knew how much was owed to him when he was put on trial for breaking another code: the taboo against homosexuality.

· Masks must be worn inside the theatre.

As of 14th February 2022, the presentation of a Covid Vaccine Certificate is no longer obligatory to attend the theatre

· No tickets will be printed or sold at the door.

· The above is subject to possible new Public Health directives..

This amateur production of "Breaking the Code" is presented by arrangement with Concord Theatricals Ltd. on behalf of Samuel French Ltd. www.concordtheatricals.co.uk