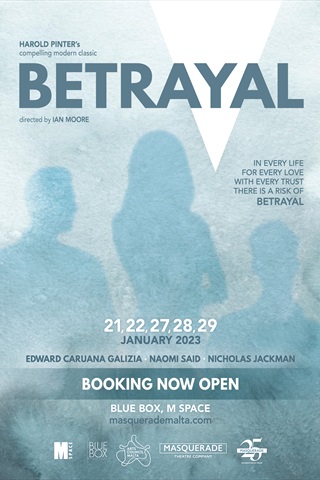 As secrets and lies unravel, time spools backwards revealing the first sparks of passion ignited between Emma and Jerry, placing the audience in the tantalising position of knowing more about what is happening than the protagonists.

BETRAYAL, Harold Pinter’s mesmerising masterpiece of relationships and adultery, stars Naomi Said (Films: Punchline and In Corpore and Comedy Knights) as Emma, Edward Caruana Galizea (Othello, Importance of Being Earnest) as Jerry and Nicholas Jackson (Breaking the Code) as Robert.

Tender, moving and widely considered to be Pinter’s most accessible work, this devastating dissection of a love triangle, presents a compelling portrait of both the relationship between the lovers and the competitiveness of male friendships.

Please Note: No latecomers will be allowed entrance after the show has started