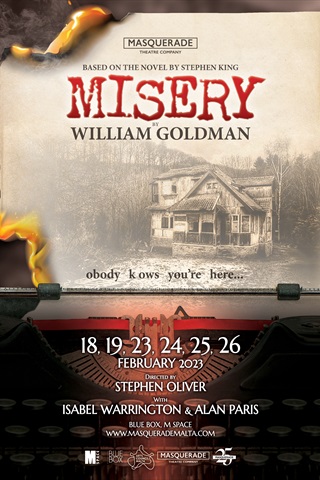 Based on the book by Stephen King

Misery is a fascinating thriller about a successful romance novelist named Paul Sheldon, played by Alan Paris, who is saved from a car accident by a super fan named Annie Wilkes, played by Isabel Warrington. Wilkes, however, has recently found a reason to resent her favorite writer, as he killed off her favorite character, named Misery Chastain, in the lastest novel of his novel series. Therefore, when Sheldon wakes up after the car crash, he finds himself alive and well, but also kidnapped and held hostage in Wilkes’ basement. Wilkes quickly proves herself to be psychotic, and Sheldon does not appear to be getting released any time soon.

Running Time: 2hrs including one intermission